Yet the vocational education system has fallen into disrepair, leaving the world’s second-largest economy ill-equipped to replace millions of highly skilled people retiring as the population ages and the workforce shrinks. In 2021, 57.8 percent of Chinese people aged 18 to 22 were enrolled in higher education, according to the Ministry of Education. Meanwhile, the proportion of enrollment in vocational high schools fell to 35% in 2020 from 60% in 1998.

A growing labor market mismatch becomes even more visible this year as record numbers of college graduates leave campuses at a time when the economy faces greater headwinds from slower growth and disruption. pandemic. China has invested heavily over the past 30 years in public higher education.

Recognizing the problem, Chinese authorities are scrambling to overhaul and rebuild the vocational training system. Last month new amendments to the Vocational Education Act 1996 came into force. The revision – the first since the law came into force a quarter of a century ago – should solve obvious problems while providing a legal basis for the long-term development of vocational education.

The enactment of the new amendment raised hopes of a boom in vocational education. But reshaping the underdeveloped system and changing people’s long-established perceptions will take a lot more effort, education experts say. Many Chinese students and parents are reluctant to consider vocational training, either in place of high school or higher education. This reflects the weakness of the current vocational training system and public stereotypes that vocational schools are “low-end and shoddy” and inferior to universities.

According to experts, changing these perceptions and making the professional system better serve the economy requires more investment in resources and talent to raise the quality of the sector. There must also be institutional arrangements to provide vocational school graduates with wider opportunities, such as a “higher passage” linking vocational education with general education that allows students to change pathways, they say.

In September 2020, nine central government departments led by the Ministry of Education issued a directive with the aim of expanding enrollment in vocational schools and establishing a higher education system for vocational training. In June 2021, Henan Province unveiled a plan to establish a local vocational college entrance examination system in which the weighting of vocational skills test scores would be at least 50%.

In October, the State Council, China’s cabinet, issued a directive to promote “high-quality” development of vocational education, with the aim of expanding the share of enrollment in vocational colleges to at least 10% of total enrollment in higher education institutions. by 2025.

China began building its vocational education system in the late 1970s in hopes of addressing a talent shortage after a decade of educational and economic disruption. In 1985, the central government issued a policy document to establish a two-track education system in which about half of the students would receive vocational training in high schools. The policy reflected the country’s urgent need for skilled workers as well as a wave of college-seeking students that was overwhelming the education system.

This policy fueled a vocational training boom in the 1980s. By the end of 1989, there were 9,173 secondary vocational schools in China, enrolling over 2.8 million students. These schools laid the foundation for the current vocational education system in China.

In 1990, 48% of Chinese students admitted to high schools went on to vocational schools, up from 21% in 1980. The ratio increased further to 60% in subsequent years.

Chinese families then preferred vocational schools because they trained students with practical skills that could ensure a stable career. State-owned enterprises and government institutions have supported many vocational schools to meet their own needs for skilled talent.

But a radical overhaul of public enterprises and reshuffling of government institutions in the late 1990s severed the links between vocational schools and these sponsors, affecting the schools’ access to funding.

Although the Vocational Education Act 1996 provided the legal basis for the development of higher vocational education, the system was gradually marginalized as the focus shifted to general and vocational education, producing scientists, business leaders, engineers, doctors, lawyers, economists and civil servants. bureaucrats. 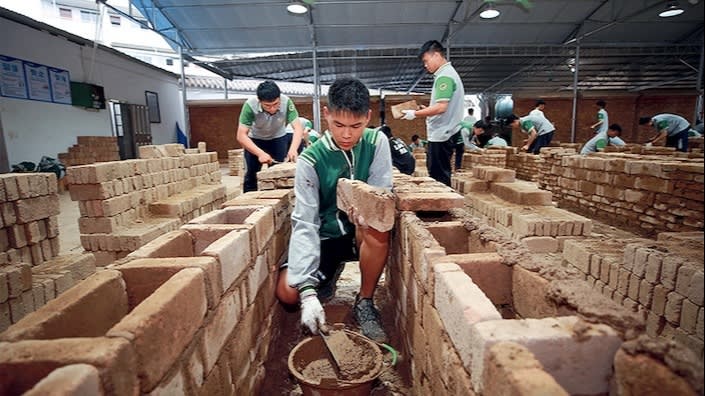 Chinese colleges and universities grew rapidly in the 2000s as authorities worked to increase the supply of higher education. Universities have invested heavily to add departments to attract students for various subjects. In the five years since 1999, undergraduate recruitment in China has more than tripled. The world’s largest university system has produced 240 million college graduates, nearly 18 percent of the population, according to the Department of Education.

Low social recognition, insufficient resources and poor quality of education have plagued many vocational schools in China. A 2020 Peking University survey showed that only 35% of vocational high school graduates managed to find a job.

According to Wang Shoubin, deputy director of the Institute of Vocational Technology at Suzhou Industrial Park, companies that were once major sponsors of vocational education have backed off as it has become increasingly difficult to secure a supply of skilled graduates. .

The fate of vocational schools reflects the opaque goals of vocational education in China – whether it is vocational training or the acquisition of general knowledge, experts say. Behind the scenes, a disconnect between issuers of academic certificates in education departments and issuers of professional qualification certificates in human resources and social security departments, which affects the employability of students.

Different types of vocational training institutions and vocational schools come under the separate supervision of the Ministry of Education and the Ministry of Human Resources and Social Security, with different requirements and standards.

Calls have grown in recent years to unify the oversight of vocational education, but no concrete action has been taken due to the complexity of budgets, resources and the large number of jobs involved.

Developed economies around the world, including the United States, have faced similar workforce development challenges with varying degrees of success and failure.

Many vocational education experts have suggested that China takes inspiration from Germany’s dual general and vocational education system. More than half of German students choose vocational schools on their own initiative because there is no hierarchy valuing one type of education over another. This is based on a comprehensive and integrated system of dual education, school-business cooperation, legal protections and culture.

The new version of China’s vocational education law is expected to pave the way for long-awaited changes. The revised statute includes a clause to develop college professional education offering an equivalent undergraduate degree. It also undertakes to develop the training of skilled workers in vocational colleges and encourages the involvement of businesses and non-governmental organizations.

But there are still many unresolved issues, experts say. The implementation of the new law also awaits detailed guidelines and supporting policies with coordination among different departments to be carried out, according to experts.

Caixingglobal.com is the English-language online news portal of Chinese financial and business media group Caixin. Nikkei has an agreement with the company to exchange articles in English.

The Small Industries Development Bank of India (SIDBI) has in principle agreed to support Ramakrishna Mission Ashrama, Sohra in Meghalaya for the establishment of an alternative livelihood center to be named “Swavalamban Alternate Livelihood Unit for The East” (Salute) . The Sohra center in Meghalaya will organize professional courses in weaving, sewing, fashion design, knitting, […]

DARIEN – A new collaboration with the Darien YMCA marks the latest venture in town for Abilis, a Greenwich-based non-profit organization that provides employment opportunities and training for young adults with developmental disabilities in Fairfield County. A local version of the SEARCH project was launched in January. Now, four interns from the program are stationed […]